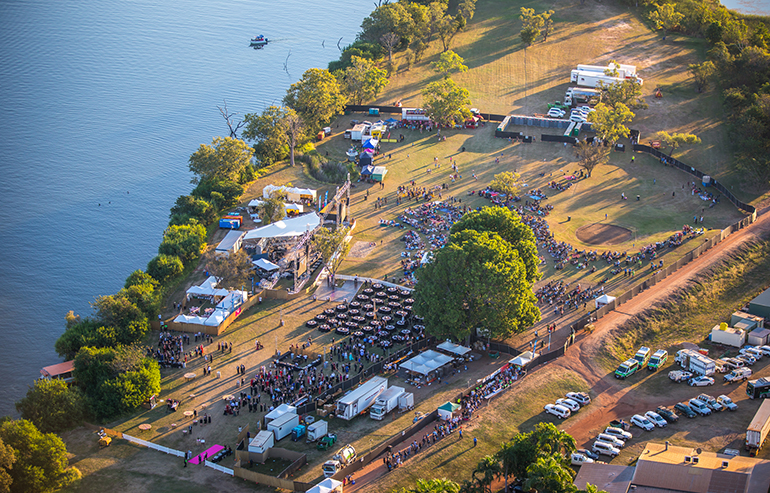 Written for the Ord Valley Muster by Dianne Bortoletto

“The value of the Ord Valley Muster and the Aviair HeliSpirit Kimberley Moon Experience to the Kununurra business community is well recognised by the lengthening of the tourist season and the raising profile of Kununurra as a destination,” Mr McConachy said.

“To see the event supported by the same founding business 17 years on is a real success story for the Kimberley Moon Experience and a testament to the belief in the event by the business.”

The first edition of the Kimberley Moon Experience in 1999 was supported by the aviation company, then called Slingair Heliwork WA.

Since its inception, the Kimberley Moon Experience has taken off to become a ‘must-attend’ bucket list event headlined by Australia’s biggest artists including Jimmy Barnes, Paul Kelly, Bernard Fanning, Daryl Braithwaite, Guy Sebastian and Eskimo Joe. It includes a black tie sit down dinner area for 500-plus guests under the stars with an exclusive dance floor and a more casual general admission area for families.

The Ord Valley Muster is a nine-time Festival and Events winner at the WA Tourism Awards, inducted into the Hall of Fame in 2011 and the Kimberley Moon Experience in 2008.

Awarded gold at the 2017 WA Tourism Awards in the Major Tour and Transport Operator category, Aviair operates the most impressive general aviation fleet in the Kimberley. Aviair is the air tour specialist for the magnificent Bungle Bungle and Mitchell Falls as well as chartered corporate flights across the Kimberley and Pilbara.

With a fleet of 13 beautiful turbine engine aircraft including Cessna Caravans, Pilatus PC12s and Super King Air B200 types, Aviair is an expanding regional airline operating regular flights in the Kimberley with plans to soon operate a network connecting the Pilbara, Kimberley and Gascoyne regions.

The Aviair HeliSpirit Kimberley Moon Experience concert will be held on Saturday 19th May 2018 at the Jim Hughes Amphitheatre on the banks of the Ord River. The line-up announcement will be made in the coming weeks.

In the meantime, save the date and start planning an extraordinary Kimberley experience at the 18th edition of the Ord Valley Muster held in Kununurra in Western Australia from 11 to 20 May 2018.

The State Government is a proud supporter of the event through Tourism WA's Regional Events Program.

To read more about the Ord Valley Muster, visit:
www.ordvalleymuster.com.au