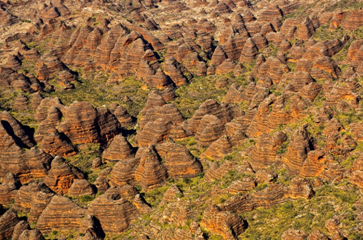 Purnululu meaning ‘sandstone’, which is exactly what the Bungle Bungles are made up of.  The national park covering an area of 240,000 Ha with the bungles taking up 45,000ha and standing 200m above the surface. The ranges date back to being 350 million years old.

The area remained largely undiscovered until 1982 when filmmakers were introduced to the area by mustering pilots. They flew the film crew over the bungles. A documentary was made and it became popular tourist destination. In 1987 Purnululu was declared a national park and in 2003 the Bungle Bungle’s became world heritage listed.

Horse shoe valley, like other small valleys in Australia, its honoured by the aboriginal people for magical and religious beliefs. Scattered amongst the valleys are ancient artwork and burial sites. They were once accessible by the public but they had a few problems with the public taking things from these sites, resulting now in prohibited access.

The bungles are essentially a sandstone rock formation. With sand and gravel being washed down into the area, over millions of years, when this was once under water, compacting down to form sandstone. Over time a huge plateau of this sandstone has been uplifted from the surrounding plains. Wind and water then shaped the sandstone into what you see today, the beehive domes. The unusual orange and dark grey banding are caused by differences in the layers of sandstone. This is best seen by a Kimberley helicopter flight.

The darker bands hold more moisture, and are a dark because of the blue/green algae, also known as a cyanobacteria.The orange coloured layer is an iron-oxide staining, commonly known as rust. As the iron and manganese mineral deposits mix with the outside oxygen it creates iron-oxide.

Beneath this harder outer shell  that usually sites around 5mm thick is the natural “off white” sandstone rock which crumbles easily. It’s for this reason no one can climb the bungles.

The domes are formed by the winds and weather coming of the Tanami desert, picking up sand, small stones and grit off the ground and blowing over the bugles. This predominant wind, acts like sand paper grinding away at the rocks. In addition, water that settles on and in the cracks of the rocks is slowly eroding the domes away.

Gibb face (southern Face) is most exposed to prevailing SE winds from the desert, most photographs and postcards are from this area.

Cathedral Gorge is known for its acoustic values, said to be similar to the Sydney Opera House.Also the location where Qantas 2009 TV advert was filmed, featuring the Australians Children’s choir. This can be explored on foot with a guided walk by East Kimberley Tours.

Coalition is a group of rocks that stand alone. Due to erosion over the years, this formation has completely separated from the main bungles formation. It has roughly the same footprint as Ayers rock in Uluru but standing 2/3ds of the height. To give you an idea of the size of the bungles, this makes up just one percent of the massive.

Deep gorge is not the deepest gorge but still 200m tall. Livistonia Palms grow in the gorge thanks to their extensive root system, which allows them to survive the dry season.

Piccaninny gorge is the longest and deepest. Created by a meteor strike millions of years ago, nearly splitting the bungles in half. 18km walk takes you all the way through to the secret gardens. Half way through, where the three gorges meet you will find base camp, with a natural freshwater pool that is a popular overnight camping spot.

Above base camp is an example of where a lightning strike in 1998 hit the Bungles.

Echidna Chasm- can also walk in. Gets very narrow at some points 2 shoulder with wide and can vary 10-20deg temp drop as sun struggles to get in there.

Start to see a change in the rock formation, a lot more solid and flat, less erosion due to the shielding from the wind from the Tanami desert.

To get a different perspective of the Bungles, guided tours by East Kimberley Tours are available as are Kimberley helicopter tours from HeliSpirit.